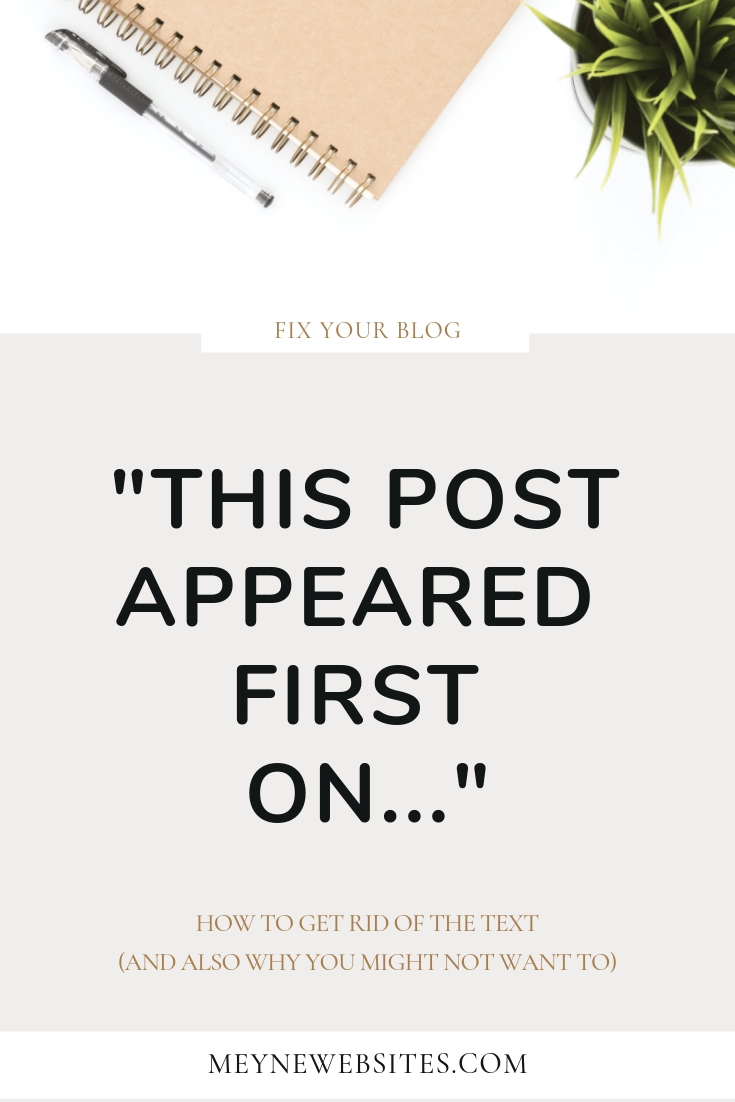 You got your RSS feed set up (woohoo!).

But when you test it, there’s a line at the bottom that says “The post appeared first on”  It shows in your MailChimp emails, MailerLite, in feed readers.

And it’s annoying.  Mostly because you can’t where it’s coming from.

So where did the text come from?  The Yoast SEO plugin adds it by default, but the good news is that it’s really easy to get rid of (or change it to something that is written in your own voice).

First, why does it add that text?

This feature is used to automatically add content to your RSS, more specifically, it’s meant to add links back to your blog and your blog posts, so dumb scrapers will automatically add these links too, helping search engines identify you as the original source of the content.

The more popular your blog gets, the more likely it becomes that you will eventually have someone trying to steal your content word-for-word and paste it onto their own blogs–without giving you credit or linking back to your blog.  The dirty thieves actually use your RSS feed to automatically steal and copy your content.

Having the exact same blog post on two different blogs could be confusing to Google.  Google wants to send traffic to the original source and not a thief’s site, but without credit and links to the original site, they might not know which one is the original.  This is why Yoast adds the line “The post appeared first on” and links it back to the specific blog post, and your blog homepage.  It automatically tells Google that the post belongs to you, and Google will send their traffic to you.

So it is worth weighing the risks before deleting the text altogether.

Here’s how to get rid of the text

How to get rid of “The post appeared first on” from the bottom of your emails and RSS feeds.

You’re all set!  Your emails will no longer say “The post appeared first on” at the bottom.

Here’s how to change the text

The other option, if you want to keep the links back to your blog is to change the text so it sounds more like your voice, maybe something more fun.

For that, just change the text around %%POSTLINK%% and %%BLOGLINK%% (you don’t want to remove those, because those are the actual links back to your post and homepage.  For example, the posts on this blog say:

Christina’s post %%POSTLINK%% was written for %%BLOGLINK%%.  Which would translate to:

You might like a free DIY blog audit checklist! It’s just 2 pages of things your blog should have to be successful going in to 2020.

Woo hoo! You should get a message from me soon (check the dirty spam folder if you don’t see it. I look forward to getting to know you! 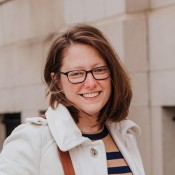 WordPress developer for bloggers since 2014, occasional blogger since 2011, code perfectionist. Passionate about helping you make your blog a successful business.

How to prevent your own pageviews from showing in Google Analytics
Why aren’t my latest blog posts showing?
Change “Read More” link into a button
How to add an Instagram gadget to Blogger

Woo hoo! You should get a message from me soon (check the dirty spam folder if you don't see it. I look forward to getting to know you!

It was so fun working with MaryAnn at @thebeachhou

Let other people find the bugs first and be safe w

Do you do a word of the year? I didn't pick one fo

We said goodbye to our best boy and sweetheart Ros

What's your hobby? (And first, please excuse my ba

Do you write like you talk? When I started my own

It's good to think about where you started once in

When your reader reaches the end of your post, tel

We launched! I’m sure you all know Erika @thepan

Still just showing your latest posts on your homep

If something you're doing isn't working, don't jus

It's coming soon--like next week! (assuming I can

Working with food bloggers does have its down side

We got back from beautiful Canada last week! Not c

"The difference between an adventure and an ordeal

I've mentioned before that we have a dog sitting b

If you're like me and have trouble sticking to a d